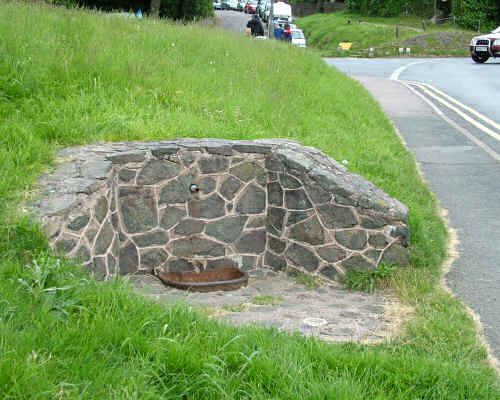 Around the Malverns stories of herbal healers or witches abound, ranging from the play the “White Witch of Welland” to the factual accounts of 17th century witch trials recorded in the Worcestershire Sessions Rolls. Some people assume that the area known as the Wyche Cutting, where the road cuts through the Malvern ridge, has a connection with witches and the existence of a “Pixie Path” nearby may strengthen this idea. Controversially, a wind-vane in the form of a witch on a broomstick has recently been fixed on top of the local bus shelter. Perhaps this association with witches and the supernatural that still persists today at Wyche Cutting was also reinforced by stories of hangings here. After they had been beheaded at “Sewet Oaks”, felons were hung on the “forest gallows” at the Wyche in the 13th century and the dead bodies are said to have been carried up here along the Pixie Path.

The word wyche may derive from the Saxon words ‘wic’ meaning village, or ‘wich’ for a street or track often associated with salt. The Wyche Cutting is one of three passes through the hills and was probably an ancient trade route for pack animals carrying salt. Later the cutting was on one of the Roman salt trade routes from the Droit-‘wich’ brine springs to South Wales.

A map of 1633 shows a spring near Wyche Cutting named as Primes Spring and earlier in about 1400 it was referred to as Primes Well, but the actual site of this well is still debated but is thought to now be under the grassy bank below High Land Cottage. After the construction of the new tarmac roadway in 1836, a public spout was installed on “the Tump” on the opposite western side of the road. In 1930 this water was described as a coming from a pure Archaean granite spring. Now named Wyche Spout, it was primarily for the use of quarrymen working for the Pix Granite Company, who lived in the houses built here from about 1848.

This spout was much valued and used by local householders until about 1990 when it was cut off as being polluted. As the water never seemed to cause them any illness, some villagers say it was cut off to deter sheep crossing the busy road from Grundy`s Meadow to have a drink, but even without the water the sheep are still a familiar sight here. The spout was Well Dressed occasionally until the 1970`s and is now annually Well Dressed by residents who would like to see the water supply restored, which the Malvern Spa Association is working to achieve.