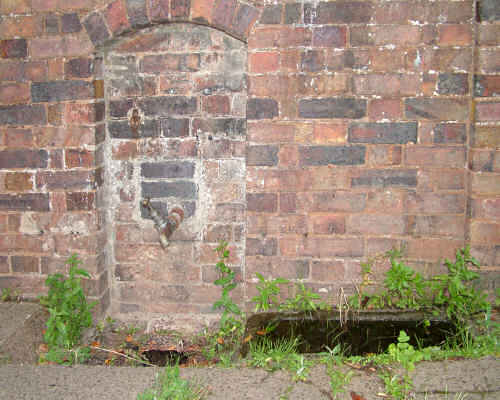 A large bronze tap in a brick arched recess within a curved retaining wall on West Malvern Road beside the post box. The site and tank above (now dry) are owned by Ron Mason whose deeds date back to 1886. The spout used to be supplied from the “Main Spring”, one of three springs at the top of Westminster Bank.

In 1844 when the St James’ Church was dedicated, West Malvern became a parish and the Tap was put in place by Charles Morris “Erected for the accommodation of the inhabitants of the neighbourhood.”. There was no road through to Wyche Cutting until 1861. With the permission of the Malvern Hills Conservators in 1904, villagers paid by subscription for Mr A.G. Lewis of West Malvern to do repairs and clean out the water tanks. Villager’s records show that in 1923 Miss Baird at St James`s School paid 13/- which was 6 parts of 8 shares of costs. Dr Hope and others paid 2 shares at about 2 old pence each for maintenance of the tanks and pipework. Villagers believe “they last cleaned out the spout and tank in 1976”.