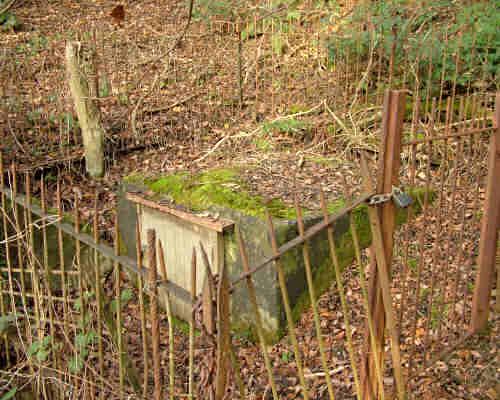 Walm’s Well, Wa’am’s Well or St Waum’s Well is at Tippin’s Rough in News Wood, on the southwestern slopes of the Malvern Hills and was named after an early Christian missionary. It is one of the most ancient surviving well sites in the Malverns, traced back to between 200 BC and 50 BC. At about that time the La Tene culture of ancient Britons built a track-way to their newly fortified hilltop of British Camp, which went through News Wood and beside this well. As there were no springs within the hill defences, this may have resulted in votive offerings being dropped into its depths as in other ancient sites.

In 1875 James McKay, a writer for the Malvern Advertiser, wrote; – “In Colwall we have Walm’s Well, which yet is much resorted to by the rustics, on account of, what they regard as its admirable curative properties; and Moorall’s Well, which though less known now was formerly quite as celebrated – The Silurian Christian Missionaries Moorall and Walm stood by what we now call Burstner’s Cross and Rye Cross, endeavouring to allure the Celts from the rites and superstitions of their Druid faith. Surely we may picture woad-dyed Britons trooping from the British Camp to see little children baptised in the Gullet stream, or in the sparkling wells on the slope of the hill.”

From at least the 17th century Walm’s Well was revered as a healing well, particularly for skin diseases. In Victorian times there was a wooden bathing hut nearby for the use of “water curists”, but with only room for one person at a time to bathe. “Walm’s well had been long used by the country people as an outward application in cutaneous diseases. The water flows in a pretty copious stream and at the place where it issues from the hill, is collected by an embankment of wood and mud to form a large bath.”

The well was apparently enclosed and fenced off from the public about 100 years ago as part of the privately owned Eastnor Estate. In 2004 Coca-Cola who now bottle Malvern water from Primes Well in Colwall, (known as Pewtriss Well until the 19th century), wanted to extract more water by drilling a borehole beside Walm`s Well, but withdrew their planning application after it was opposed by Malvern Spa Association and others.

(extract from Malvern “Hill of Fountains” by Rose Garrard 2006)