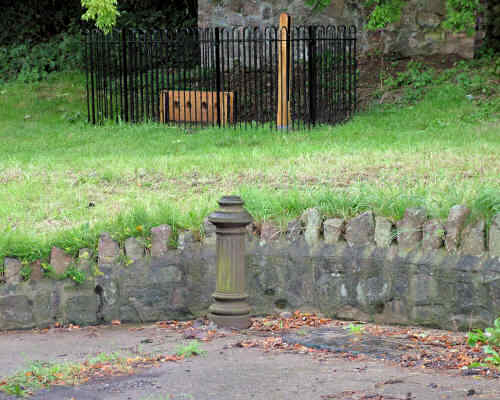 The remains of Stocks Fountain can be seen within a curved wall beside the beginning of North Malvern Road, above Trinity Church, on common land just below the old stocks and animal pound.

Once a drinking fountain supplied from the spring water main, with an adjacent animal trough, it was installed in 1895 by the Society for the Prevention of Cruelty to Animals. All that is left today is the short cast-iron pillar that local residents remember as originally having a stainless steel drinking spout on top, possibly removed in the 1970’s when nearby Clock Tower supplies were also cut off.

The stocks and whipping post are visible remains of the parish justice system from Tudor times to the mid-nineteenth century when they were under the authority of the elected constable who collected county rates and carried out orders from the magistrates. Originally one of many, the Livestock pound was used to contain animals that had strayed off the commons. A fine was charged by the constable to their owners when they were claimed, or if unclaimed they were sold for the benefit of the parish.