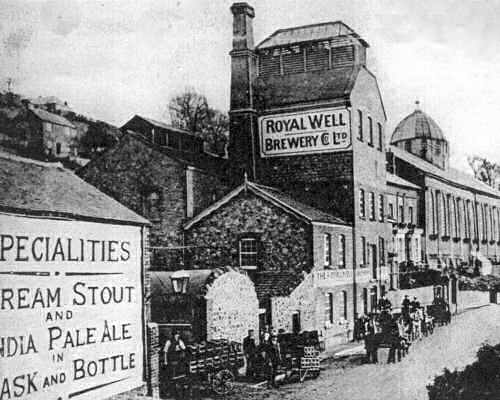 After building the Royal Well public spout, the gentry appealed to William Ryland to create a well room for their own use. He then went on to build an ambitious domed hall seating 2,000 people, “opened in May 1883 by Jenny Lind, in the greatest grandeur, before a gathering of all the Worcestershire and Herefordshire elite.” (Worcestershire Archaeology & Local History Newsletter, 1979 No 26) This included a “Spa Pump Room”, a refreshment bar, a suite of water cure baths for “tourists and invalids” and an art gallery. In a recess decorated with flowers was “a white marble fountain in the shape of an angel pouring water from a lily flower, which it held in the right hand, while in the left was an unfurled scroll bearing the inscription: God`s water, Drink and thirst not. Pure water is life.” (Guide to the Royal Well Spa, c. 1883)

But in 1885 the attractive Assembly Rooms in Great Malvern (Now Malvern Theatres) were opened and the Royal Spa became known as “Ryland`s Folly”, closing down in 1895. Ryland was bankrupted and the site was soon vandalised and became derelict. It was demolished in 1937, but the original Royal Well public spout still remains and has a good flow of water.