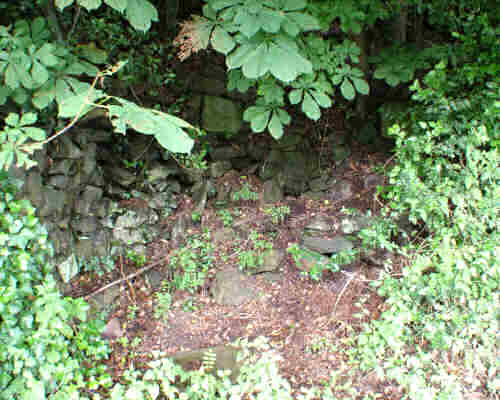 Hidden in the overgrown bank on roadside of Wells Road above Abbey Road junction, there is a Malvern stone recess or once picturesque ‘rocky grotto’ with railings above, still with the remains of a spout and seat flanked by two weathered stone tablets which were once inscribed. The MSA plans to have these re-cut and restore the site as part of the Malvern Heritage Project – Springs Restoration. The water originally flowed into a small trough, which the MSA also hopes to replace, but as it is on a very busy roadside without safe public access the site will have to remain dry.

In 1993 Osborne and Weaver identified the two texts as; –
“Here the weary may rest and the thirsty refresh and as all on their way are freely welcome to partake of these blessings, so are they invited to preserve and protect from every injury this fountain, 1860.”

The site was constructed in 1860 but by 1864 the spring flow was very variable, sometimes reduced to a mere trickle. At the suggestion of Charles Grindrod it was connected to the spring water main but soon this also proved unreliable and the area became neglected. However two local residents have reported to the MSA that they regularly drank from the spout on their way to school in the late 1940’s and at that time there was also a white marble book, one page was inscribed with the words:-

“Not for ever in green pastures
will I only rest and stay
But to strike the living waters
from the rocks upon my way.”

The opposing page was not recalled so precisely but what was recalled appears to be based on a quote from The Holy Bible, and read something like:-

Today the site is at the side of a busy road junction without a pavement to provide safe public access, so be careful!