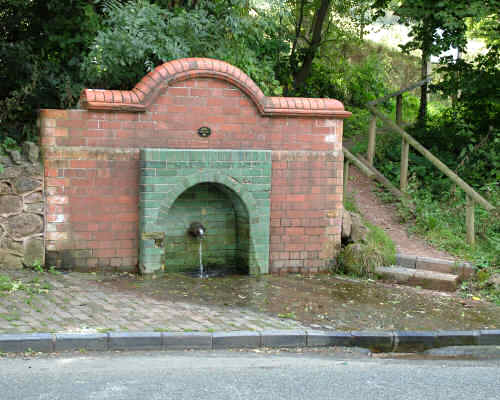 This prolific spring water source can be found as you leave North Malvern on the Cowleigh Road going towards Storridge. The spout is on the left just past the cross roads with Lower Road and Cowleigh Bank. There is a convenient car park behind it with information on the ‘Worcestershire Way’ walk.

This has been a popular collection point for many years but caution must be advised as only about a quarter of the tests in recent years have shown it to be really pure, so the water must be boiled before drinking. Suspicion still rests with the new 1990’s housing on West Malvern Road, plus the sheep and horses often in the field above the spout, but those who drink the water regularly claim no ill effects. Encouraged by the MSA, some repairs to the spout have been undertaken since 1998 to improve the flow and prevent ground water run off entering the tanks and polluting the supply.

Previously known as the Cowleigh Spout, Earl Beauchamp installed the present Royal Doulton green glazed brick surround in 1905 for the use of the local inhabitants, originally with a bronze lions head spout. He also had tanks built behind the spout and several miles of pipes installed, which today still take the overflow water down to fill the moat at Madresfield Court. The Madresfield village also relied on this spring supply, only receiving treated mains water in 1955. For a few years in the 1980’s the water from here was transported and bottled by Bennett Dairies who delivered it with their milk until the costs proved uneconomic. This site was included in the original MSA research list for complete restoration as part of the Malvern Heritage Project – Springs Restoration, but legal responsibility for its ownership and future maintenance proved elusive, excluding it from Heritage Lottery funding.

Following a newspaper appeal in 2007 a nearby resident contacted the MSA. He told us that in 1914 the tenant of the nearby Cowleigh Park Farm, then owned by Madresfield Estate, served bravely in the 1st World War and in recognition of his gallantry Earl Beauchamp gave him free and ‘in perpetuity’ a spring water supply piped to the farm from the spout. Later the farm was divided in two, both supplied by the spring, but these legal rights passed to the owners of ‘the Byre’ half of the farm. Today it continues to be their sole water supply, coming from their own separate slate tank behind the spout, but they don’t own the spout itself. Although the MSA has not identified the spout owner, we hope that we have shown ‘due diligence’ in our search so that the spout can now be fully restored as part of the Malvern Heritage Project.
(RG 2007)