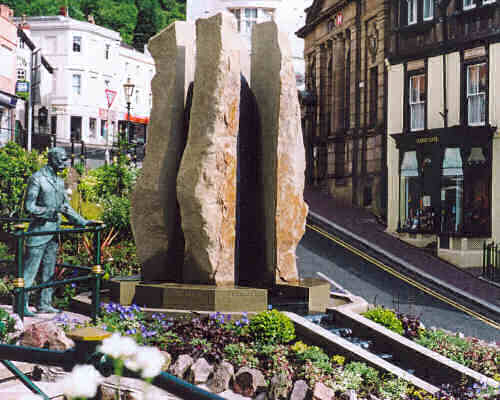 The Enigma Fountain is at the northern end of Belle Vue Island, Great Malvern, at the top of the flight of steps from Church Street and incorporates a bronze life-size figure of Sir Edward Elgar.

The fountain was commissioned by Malvern Hills District Council and designed by Rose Garrard to celebrate Sir Edward Elgar, his music the Enigma Variations written in 1900 in Malvern, and Malvern’s pure spring water. The Variations themselves are made up of fourteen sections, each a musical portrait of a local friend represented as an ‘enigma’ by only their initials, and these letters are each carved on the fourteen sides of the fountain in a facsimile of Elgar’s own handwriting, beginning and ending with the initials of himself and his wife Alice, meeting at the feet of his bronze figure.

The feature is fed by natural water pressure from three springs on the hills high above the town and water trickles from the top of a three metre high Welsh slate gothic archway, spanning the centre of a slate millennium cross symbolising the early eclesiastical origins of the town. Beneath the archway is a central water jet flanked by four, four metre high pillars of York stone, the same material as the facia of nearby buildings, but suggesting the hills themselves and the springs beneath them. (Malvern stone could not be used here as it is a very hard granite that cannot be cut as it fractures easily into small blocks.) The figure of Elgar outside the handrail provides a popular photo-opportunity for visitors.

Throughout April 1999 Rose undertook a month of public consultation for the Malvern Hills District Council to determine the theme for a major Great Malvern water feature in celebration of the millennium. The Council’s beautiful Victorian conservatory in Priory Park was opened to the public for the first time since its restoration and became the studio workspace for Rose as Artist in Residence for the second time (see Malvhina). Four possible themes were identified ; Fossils, Piers Plowman, the Green Man and Sir Edward Elgar. The majority of public support was for the last theme and Rose’s design of ‘The Enigma Fountain’ was chosen by the Council to provide this landmark for the town centre. She went to a quarry near Leeds to select the single block of stone to be cut into four, designed and co-ordinated everything down to the plumbing and immediately began modelling the figure directly in plaster to be cast into bronze in London. The project was funded by Malvern Hills District Council and supported by Severn Trent Water, Waitrose, Border Office Supplies and West Midlands Arts. The town centre was filled with flags and crowded with people despite the rain when the fountain was unveiled by Prince Andrew, HRH the Duke of York on 26th May 2000.