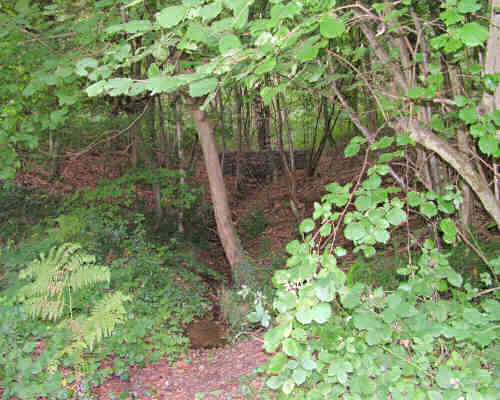 The site named as the Devil’s Well is high above a metal bench and lamp post beside the Holy Well Road, several bends to the south of the Holy Well itself. The “well” comprises a small water collection cistern high in Tumuli Valley, which can be found by following the stream uphill beyond the pig wire and stone gabions. After a bad hillside fire here in 1987 there was some land slippage, so the Malvern Hills Conservators acting on a technical report by Sir John Knill, put gabions of stones in place across the stream to prevent any possible further landslide, but contrary to some visitor’s beliefs, these do not cover the “well”.

The naming of this site has aroused some controversy, as long-term residents living nearby report that they have never heard of it named as “Devil’s Well” before. The MSA could find no records of this site being called a well or being associated with the devil before 1997 when Weaver & Osborne named it and claimed that the name derived from connections with the “Puck’s Wood” that surrounds the site. They suggested that the origin of the name Devil’s Well came from English folk lore as the ill’s inflicted by this malevolent fairy or hobgoblin on his human victims were apparently cured by bathing in a “Devil’s Bath”.

Several spring sources emerge even higher up the hill, which flow down the valley into various private gardens. Curiously in 2005 neighbours on Holy Well Road reported to the MSA that a stream still flows into “a kind of ancient stone hip-bath” in the top of their garden, but others thought the structure was just a small pond… (RG 2007)