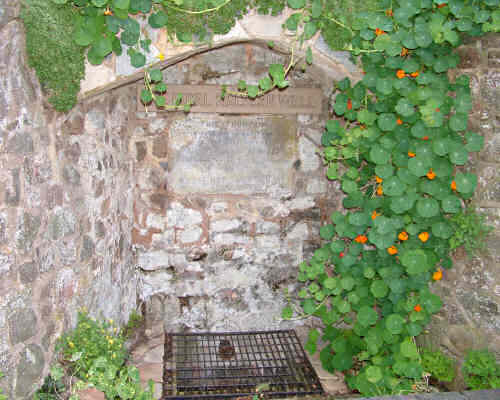 In 1868 a sickly William Ryland, the Mayor of Bewdley, came to Great Malvern to take the healing waters to try to cure his consumption, but without success. A local resident advised him as a last resort to try the waters and air on the other side of the hills and after regularly drinking water here his health improved. The source was kept secret from him but he soon discovered the water was from St Thomas` Well inside an old cottage, which he managed to buy. But local people resented Ryland`s control over the well and burnt the cottage down.

In order to placate them, in 1870 he built a public spout beside the highway, supplied from the original source and from then on locals annually well dressed it with a profusion of flowers and garlands. The local paper reported that it was “beautifully dressed with flowers etc. and in the evening about twenty of Mr Ryland`s tenants partook of a capital tea he had provided for them at the Royal Well Brewery.” The spout had been named the Royal Malvern Well by permission of Queen Victoria after her daughter Helena had visited and drunk its water. Twelve years later the well dressing event had become so popular that it had grown into a flower festival with music and tea provided for about 300 people.

With appeals to create a well room for the gentry, Ryland then went on to build an ambitious domed hall seating 2,000 people, the Royal Malvern Spa opened in May 1883 by Jenny Lind. But in 1885 the attractive Assembly Rooms in Great Malvern were opened and the Royal Spa became known as “Ryland`s Folly”, closing down in 1895. Ryland was bankrupted and the site was soon vandalised and became derelict. It was demolished in 1937, but the original Royal Well public spout remains and still has a good flow of water.

In the 1970`s the Herefordshire Council dismantled the upper facade over the well and the royal crest disappeared but the dedication stone was rescued and re-instated by local resident Trevor Baylis. In 2005 another cast iron coat of arms was found in a local auction by Rose Garrard and restored, and it will be put back in place if there is enough funding, as part of the Malvern`s Heritage Project springs restoration of the Royal Well Spout.

Extract from Malvern “Hill of Fountains” by Rose Garrard 2006
We use cookies on our website to give you the most relevant experience by remembering your preferences and repeat visits. By clicking “Accept All”, you consent to the use of ALL the cookies. However, you may visit "Cookie Settings" to provide a controlled consent. You can read our full privacy policy here: Read More
Cookie SettingsAccept All
Manage consent