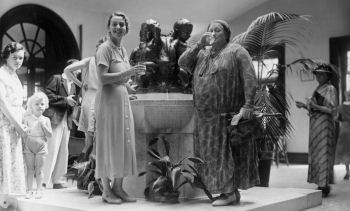 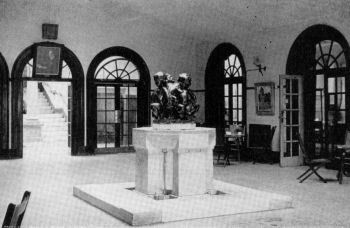 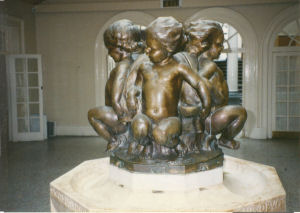 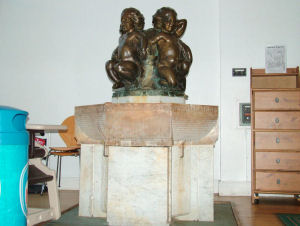 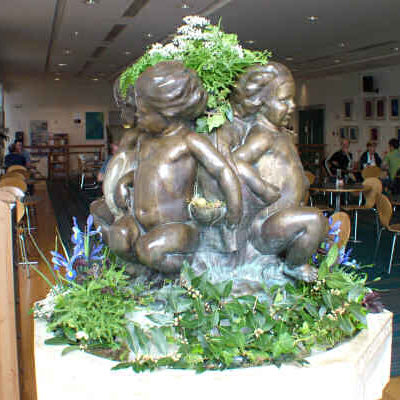 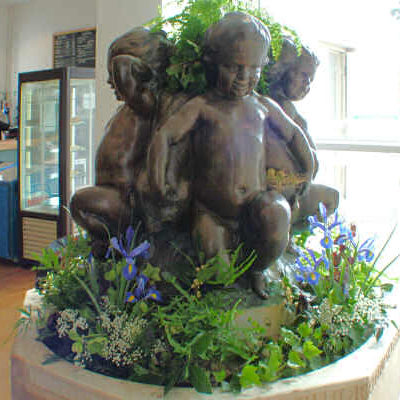 This fountain, a bronze sculpture of four water babies by Richard Goulden, was paid for by public donations in 1929 as a permanent memorial to Dr Henry Jacob, a much loved local G.P. It was originally supplied with pure spring water piped from the Rushey Valley on the hills above Great Malvern.

As part of his “Brighter Malvern” regeneration scheme Dr Jacob campaigned tirelessly for the public ownership of what later became known as the Winter Gardens and Priory Park. Having become Chairman of the Urban District Council in 1920, he finally succeeded in achieving this wish when the Council bought the land and buildings for public use in 1927. Following two nervous breakdowns during this stressful process, Dr Jacob died in 1928 leaving the town without leadership.

In 1930 his friends ensured that Dr Jacob’s other wish, to have pure Malvern spring water piped directly into the Winter Gardens, also came true when this memorial drinking fountain was installed in the centre of the Pump Room on a white marble plinth, pedestal and basin. It remained here until 1997 when the Theatre building was redeveloped. Then it was discovered in pieces by Rose Garrard and Carly Tinkler, discarded on the grass of the building site and was rescued as a result of their efforts.

The builders had destroyed the square marble plinth and pipe-work when removing it and reported they had already been offered £500 for the bronze sculpture! Brown stains from the grass can still be seen on the white marble pedestal. With considerable reluctance from the planners to have it back in the new building at all, it was eventually consigned to a corner inside the renamed ‘New Space’ or ‘Forum’. It is now supplied with tap water but this is rarely turned on and there is a growing movement from the MSA and others to have the fountain properly reinstated.
If you wish to support this campaign please contact us.

From 1930, until the 1990’s, generations of Malvernians used Jacob’s Fountain, at Malvern’s Winter Gardens, as a focal point for meeting friends and lovers.

About seven years ago I volunteered to dress Jacob’s Fountain, in the ‘new’ Malvern Theatres, as part of the annual Well Dressing event organised by Malvern Spa Association. I found Goulden’s ‘Water sprites’, atop their handsome marble basin,Jacob’s fountain in the Pump Room in its heyday irresistible, while the inscription :

“Erected by many friends of Henry William Jacob, MD, in grateful appreciation of his devoted services to Malvern – AD 1930”

Chatting with staff and visitors, whilst well-dressing, it was obvious that many people felt a real attachment to Jacob’s Fountain, but very few (including myself) knew of Dr. Henry W. Jacob, or his place in the history of the Malverns.

Henry William Jacob was born on 3rd September 1865, in Dublin, and gained his Medical Degree at Trinity College, in Dublin. The 1891 census shows him to be at the General Hospital, Birmingham, as an Assistant House Surgeon, then by 1893, when he married Charlotte Elisabeth Hunton (daughter of a distinguished classical scholar, Thomas Hunton, of Torquay), he had joined a medical practice in Taunton.

In 1895 the couple moved to the home they occupied for the rest of their lives – ‘St Helen’s’ (probably ‘Chartwell House’,  now Millers, the Opticians), in Church Street, Great Malvern. The 1901 census indicates only two servants (a Cook / Housekeeper and a Maid) so, probably a modest establishment, for the time. Charlotte Jacob devoted herself to the study of art, with some of her work being exhibited at the Royal Academy. For a long time, she was Secretary to Dr. Jacob for Malvern Art Club, and took a great interest in the Malvern Art School, while Dr Henry Jacob pursued his own profession with his practice, and was involved with the work of Malvern Hospital, being also a member of the Committee of the Hospital. He was drawn, as well, into various local causes, which meant that, over the years, he held office as Vice-President of Malvern Orchestral Society, President of Malvern Field Club and Chairman of the Malvern Savings Association.

The other major strand in his life was a deep and abiding interest in the welfare and well-being of his adopted town and it’s environs, and he was elected to the Hills Conservators in 1909. He was a strong advocate for (and sometime Vice-President of) the Malvern Development Association, which sought to widen the reputation of Malvern as a health resort, a scholastic centre and a place for visitors (both in, and out of, the ‘Season’).

In 1908 the Malvern Gazette had published an editorial summarising improvements to the town to date, and stating that “The die has been cast, and the aim of those who have the directing of affairs is to make our town a residential holiday resort… ”

In 1912 Dr Jacob was elected as representative for Priory Ward, to the Urban District Council, in which role he continued until his death in 1928. By the time Henry Jacob came into local government, the glory days of Malvern as a Spa town were fading. The demands for spring water by competing hydropathic establishments had resulted in serious shortages for local people, which were exacerbated by drought in some years, and it required an Act of Parliament (the Malvern Water Act 1905) and a debt burden, which took decades to repay, to create, by 1908, a safe public water supply and adequate sewerage system. This finally dispelled the fear of infectious water-borne disease such as typhoid, which in 1905 had killed three and made many others ill at Priessnitz House (now Park View), the last surviving hydropathic establishment.

Early in the 20th century the advent of the motor car, with ensuing demands for road building, meant local landowners with the right to ‘dig stone’, had begun uncontrolled commercial quarrying on the Hills. By the 1920s quarrying had been long fought by the Hills Conservators, and all concerned by the degradation of the Hills, the constant noise and dirt generated, damage to local roads caused by transporting quarried stone, and the increasing destruction of that which attracted the visitors who underpinned the local economy.

By 1920, when Dr Jacob was unanimously voted Chairman by Councillors (breaking the custom of seventeen years, when Chairmen were co-opted from outside the Council),The Pump Room as many fondly remember it he had been a member of the Board of Hills Conservators for some years, and was holding office as Vice-Chairman of that body, until ill health forced him to relinquish the Vice-Chair, but not before a marked advance in the protection of the Hills, resulting from co-operation between the District Council and Hills Conservators, when the 1924 Malvern Hills Act strengthened the Conservators powers, enabling them to regulate quarrying, and in places to end it by compulsory purchase.

Dr Henry Jacob died at home, on August 25th 1928. His obituary states that, “during the trying years of his Chairmanship, he frequently found it necessary to explain, and defend in the local Press, the policy which he championed in the sincere belief that the best interests of the district would be thereby served. At all times, even when feelings ran high, he maintained his position with dignity, securing the respect of those who differed from him. In politics he was a staunch Conservative, trusted by the Liberals and the Labour Party alike. For some years he was a Warden of the Priory Church. As a lecturer on a variety of subjects he commanded wide attention before Chairmanship of the Urban Council compelled him to relinquish some of his activities”

“One notable achievement which should ever be associated with the name of Dr Henry Jacob was the town’s purchase of the Priory Mansion and Grounds, the former becoming the District Council offices (exciting the envy of other authorities), and the latter a public park which, with it’s swimming baths, and facilities for boating on Swan Pool, and the seasonal series of concerts by famous bands, was a great attraction to visitors and residents alike, with considerable revenue being derived from the baths, and the boats.”

“This forward step was followed and consolidated by another enterprise, not carried through, however, without opposition; but unfortunately Dr Jacob did not live to see, in complete material form, the outcome of that great endeavour of which he was the moving spirit. He fought successfully for the purchase of the Assembly Rooms property, the council’s action being supported by the Ministry of Health, after a public enquiry which excited considerable public interest. He proved an able pilot while the plans for the reconstruction of the property were Jacob’s before the Theatre’s renovation under consideration and as time went on, saw the work of the contractors well advanced, but not the completion of what will, in effect, be a memorial of his zeal for Malvern’s welfare. A few days ago the new theatre, like the Picture House the property of the ratepayers, was opened. It was regretted that the Chairman of the Council, laid aside by illness, could take no part in the actual launching of a barque to the planning and building of which he had devoted so much effort. A Concert Hall, Pump Room and Winter Garden are now approaching the final stages of construction, and for these assets, too, Malvern is indebted to the initiative and strong and safe leadership of Dr Jacob.”

( In March 1927 Dr Jacob had written to the newspapers urging support, by local people, of the Malvern Development Association’s effort to bring visitors to the town  “We now have not only an opportunity to bring about a ‘bumper’ season, but of inaugurating a winter season as well…”)

Charlotte died suddenly in 1925, which was a great blow to Henry Jacob, and it may be forgivable to speculate that this event, combined with the heavy workload he took upon himself, may have affected his health, for reportedly “he had not enjoyed robust health for some time”. In October last year (1927) he had a breakdown, and was compelled to go away for several weeks to recuperate. He was beloved by the whole community, and his death leaves a gap in the Public life of the District which it will be very difficult to fill.”

The Reverend C. Lemin, Pastor at Malvern Baptist Church, made reference to Dr Jacob in his address on the Sunday morning after his death “All the people of Malvern would desire to show their appreciation of the great work which Dr Jacob has done in Malvern, both in his public and professional capacity, and it is probable that, even though at the present moment we realise very profoundly the great services he has rendered, it will really be a later generation who will see to the fullest extent how well he has done both. We should not forget at this time that the work Dr Jacob has done for Malvern is not only extensive and great in itself, but it was entirely voluntary…”

Many people attended Dr Jacob’s funeral, and roadsides on the funeral route were lined with bystanders as the cortege passed from Malvern Priory to Malvern Cemetery, where Henry Jacob was buried next to his wife, Charlotte. More than a hundred floral tributes were placed on, and about, the grave.

Dr Henry Jacob’s time as Chairman of M.U.D.C was noted, as well, for an increase in social (ie: council) housing’ in all Wards, for improvements to roads, and street widening, and installation of new equipment in the local Gas Works.

Sadly, the setting in which Jacob’s Fountain now stands – on blue tiles, in a cramped corner of the Theatre’s Restaurant, surrounded by general clutter, a rubbish bin, and a broken glazing unit in the adjacent window – offers neither honour to the man behind the dedication, nor recognition of the importance of his place in Malvern’s development..

My thanks to all those who’ve helped my research (- so far -), and apologies for any errors – they are mine!

I still have many unanswered questions about Henry. W. Jacob, and would appreciate any further information.