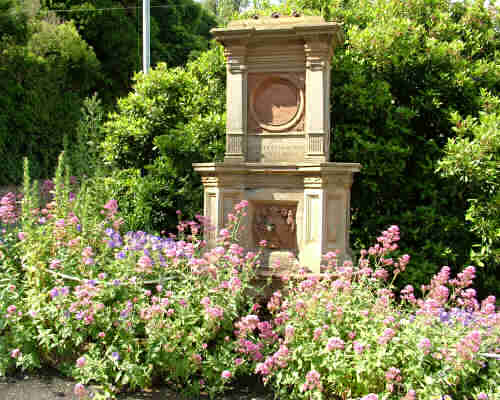 This fountain in the form of an ornate stone monument, now dry, can be found at the junction of Green Lane and Wells Road, on the corner of Grundy’s Lane.

Unveiled on 21st June 1887 to celebrate Queen Victoria’s Golden Jubilee, the fountain and several nearby dwellings were supplied with water piped directly from Holy Well. The MSA has tried to trace the ownership of this long-disputed corner of land and fountain and discovered that it was illegally transferred by St Peter’s Church to the Urban District Council in 1887 and then became neglected. In 2007 the Malvern Wells Parish Council have at last been able to undertake official ownership of the fountain from the Worcester Diocese, enabling it to be scheduled for repairs and spring water reconnection as part of the Malvern Heritage Project; Springs Restoration.