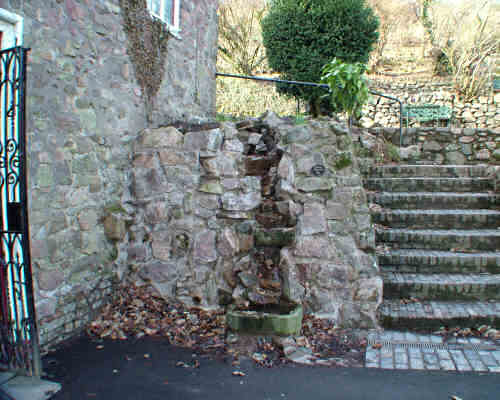 This spout beside the doorway to St Ann’s Well was supplied from a separate piped spring source until 2001 when it stopped flowing. It is thought to have been the watering place for donkeys that used to carry visitors up the steep hill. In 2005 it was restored at the suggestion of the MSA as a cascade and animal trough as part of the Malvern Heritage Project; Springs Restoration, in partnership with the Malvern Hills Area of Outstanding Natural Beauty (managing the project) and Malvern Hills Conservators (site owners). The present water supply has proved very unreliable, being connected by a pump and siphon to the St Ann’s Well itself, not to the original source. Although local dowsers believe they have traced the site of the original source for the MSA, it is in a designated ‘Site of Special Scientific Interest’ so cannot be excavated.

At the opening ceremony it was blessed by Reverend John Barr from Malvern Priory and newly named “Old Moses Spout” by Anne Jenkins of the Heritage Lottery Fund (who financed the restoration) in memory of one particular donkey. An etching of 1855 shows Betty Caley with her donkey called “Old Moses”, who is said to have carried Princess Victoria up to the well. Local stories recount that he was then named as “Royal Moses”, but sadly was soon ridden to death by those wanting to emulate this royal journey. Afterwards many of these local donkeys were renamed Moses, some say in his memory, but others believe it was only to try to attract more customers!

RG 2007
We use cookies on our website to give you the most relevant experience by remembering your preferences and repeat visits. By clicking “Accept All”, you consent to the use of ALL the cookies. However, you may visit "Cookie Settings" to provide a controlled consent. You can read our full privacy policy here: Read More
Cookie SettingsAccept All
Manage consent